drifts through debris draws attention to the growing problem of oceanic plastic pollution. Fourteen filmed dance loops are presented within an hands-on wheel of steel, back projection and driftwood. Two dancers as well as a writer were shown pictures of birds, seals and turtles being effected by plastic debris drifting through the oceans. They responded with very different choreographies to the theme.

drifts through debris have made particular reference to the 16th century book wheel of Agostino Ramelli, which he built and used to be able to compare text passages from different books by turning the wheel. It is seen as an early kind of hypertext. In ~ in the fields’ version the videoloops can be seen in a multilinear way, the different ways of responding to the theme can be compared. 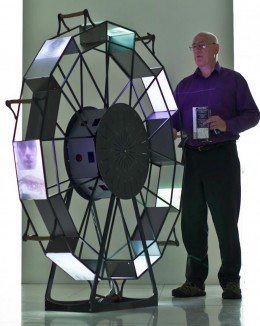 drifts through debris was created during a residency at the Centre for Design Informatics, Edinburgh University and shown during the Edinburgh Art Festival 2012 at Inspace